esperanto games yuri
@Goren на заметку: https://store.steampowered.com/app/1044490/The_Expression_Amrilato/ "About This Game Yuri Visual Novel The Expression Amrilato is a girl-meets-girl yuri visual novel. This visual novel is for people who: Enjoy subtle love-like feelings between girls. Have an intellectual curiosity for learning. Just like watching cute girls having fun. Are willing to take in a touching story that will probably make you cry. [...] In-depth Alternate World Language In "The Expression Amrilato", the main character is lost in an alternate world where Juliamo (which in the real world is Esperanto, an existing constructed language) is the official spoken language. Therefore, while enjoying a story between cute girls, you can also learn language of Esperanto! The text in this game has been officially supervised by the National Esperanto Association in Japan. You additionally might be able to learn some Japanese through the Japanese version included in the package, and Chinese is planned for the future!"
#U0SNVR (0+8) / @o01eg / 267 дней назад 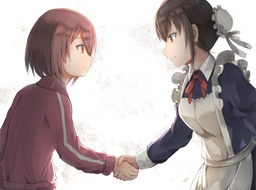